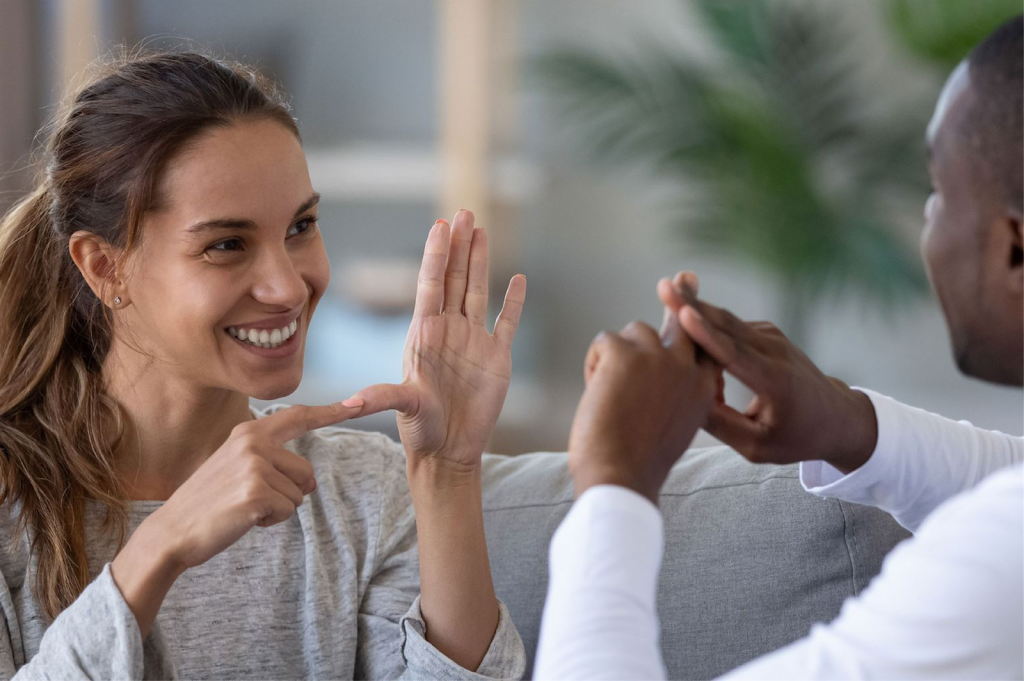 There are more than 300 different sign languages in use around the world. They vary from nation to nation.

Even in countries where the same language is spoken, sign language can have many different regional accents that bring subtle variations to people’s use and understanding of signs.

While there are similarities between some of the most common sign languages, there are also many differences.

And it’s not just the signs that vary. The speaker’s facial expressions, gestures, and body language can all have a significant bearing on how a sign language is communicated, which is why there are so many different forms of sign language, not just in the UK but around the world.

Like spoken language, different groups and cultures develop their own ways of communicating unique to where they live. For example, British and American natives both speak English as their primary verbal language. However, American Sign Language and British Sign Language differ significantly.

This is where many businesses and organisations continue to struggle to communicate with Deaf and Hard of Hearing communities.

However, most professional sign language interpreters have the skills and knowledge to understand and translate the subtle differences in sign language to a local audience, to help businesses make their services more accessible and support their Deaf employees and customers.

As its name suggests, British Sign Language (BSL) is the most widely used sign language in the UK.

It is also used by the families and relatives of Deaf people, sign language interpreters and BSL learners.

BSL has its own vocabulary, grammar and syntax and, as a language, is not dependant on spoken English.

In 2003, the Government recognised BSL as an official minority language. BSL is part of BANZSL, which comprises Australian Sign Language (Auslan) and New Zealand Sign Language (NZSL). All are derived from the same sign language system used in 19th Century Britain.

However, national variations exist, meaning that a Deaf person from Australia or New Zealand may have difficulties communicating with a BSL user and vice versa.

Even within the UK, different regions have their own unique dialects and colloquialisms. This means that a Deaf person from the south of England, for example, may use different signs to someone from Scotland or the north.

So, although BSL is widely used by profoundly Deaf people in the UK, Hard of Hearing people, of which there are 11 million in the UK, use different forms of communication support such as lip readers, speech to text reporters and palantypists.

Due to the different signs used across different regions, Sign Solutions provides local in-person interpreters to match the requirements of local Deaf BSL users, so the signs are familiar.

We also provide remote BSL video interpreters with experience of various regional signs, so that businesses or organisations looking to make their products, services, information or work more accessible to the Deaf community can provide on-demand access to BSL interpreters, enabling instant communication between Deaf and Hearing people.

As we said above, around 300 sign languages are used worldwide today, and most of them vary significantly.

Along with BSL, there are several sign languages used by English-speaking countries, including the US (ASL), Auslan and NZSL. Ireland also has its own sign language (ISL), which is derived from French Sign Language but shares similarities with BSL.

Back in the UK, Sign Support English (SSE) and Makaton are both used alongside BSL to support Deaf and Hard of Hearing people with additional learning needs.

While there isn’t a single universal sign language, there are signs that are internationally recognised. However, BSL is the system used by most of the UK’s Deaf community.

The Deaf community has always faced barriers when accessing public services. So, providers still need to do more to offer alternative forms of contact in-person and remotely that enable Deaf people equal access.

Using an experienced interpreter who understands the subtle differences between BSL dialects and other sign language systems is essential. They can help break down barriers by enabling your organisation to communicate better with a Deaf audience.

Other forms of communication used by Deaf and Hard of Hearing users also need to be considered and offered. Let’s say, for example, that a Deaf Albanian Sign Language user wished to communicate with an English-speaking hearing person. In this scenario, we would use a BSL Deaf relay and a BSL interpreter to provide the interpretation from Albanian Sign Language into BSL. It would then be interpreted by a BSL interpreter to the hearing person.

We provide BSL interpreting and translation services, plus expert consultancy, to help ensure your organisation is as accessible as possible, to attract and serve Deaf customers and offer equal opportunities for Deaf job applicants.

All the skilled BSL interpreters we work with are DBS-checked and NRCPD-registered and can provide a high-quality service to Deaf people across the UK.

We can also provide a range of accredited communications professionals for Deaf, Deafblind and Hard of Hearing users.

To find out more, and for expert advice on which type of communication support will meet your needs, give us a call on 0843 178 0773, email bookings@signsolutions.uk.com or contact us via a BSL video interpreter.

We are here for you

Choose your preferred method to contact us, we will respond promptly and professionally.